A team of five U.S. shooters shatters a Guinness World Record by busting the most sporting clay targets by a five-person team in a 12-hour period.

October 12, 2019 will always be a day to remember for CZ USA and the 5-person team lead by Product Manager and Pro-shooter Dave Miller. Dave’s team broke 14,167 clays setting the world record for most clays broken during a 12-hour period by a 5-person team.

“I couldn’t be more proud of my team. They are truly amazing,” Miller said shortly after the team broke the world record, only four hours into the competition. “We got there pretty fast, and I’m happy we set the bar high and we’re just going to keep on trucking. These four are absolutely amazing and I am honored to have them on my team.”

Team CZ shattered a previous record for the most sporting clays shot by a 5-person team (4,602 targets) set in March 2005.

In preparation for the event, all 5 shooters were outfitted with customized Wild Hare shooting vests and jackets, complete with the ShockEater Recoil Pad to help manage the effects of repeated recoil. 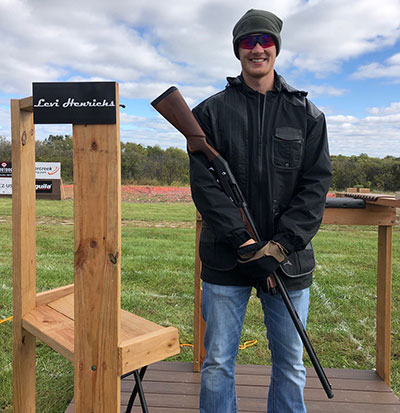 “The ShockEater pad was extremely helpful in this experience, it displaced the recoil immensely and kept my overall bruising down from the thousands of rounds we shot. Without the recoil pad I probably would’ve been hurting a lot more than I was the next day. One of the parts I liked was how unnoticeable​ it really was. Lots of pads, that I have tried are bulky, get in the way, and are constantly moving at free will. You can always tell they are there, but not ShockEater, the ShockEater Recoil Pad is a step in the right direction for anyone in the shooting world not just kids and beginner shooters. Everyone can benefit from this pad. I highly suggest this to any shooter and or game hunter.” – Levi Heinrichs

Congratulations to Dave, Levi, and the entire CZ USA Team on their record accomplishment!